I needed a replacement engine for my daughter's car & I found First Class Engines online.  After looking at other vendors, I made a phone call and talked to Buck, he had an engine in stock with 19000 miles on it and I asked a few questions and decided to purchase. It arrived on time and the engine was installed and it started right up, after clearing the codes I took it for a drive and it ran like a Finely tuned top. Thank you Buck for a smooth transaction, I would recommend this company for your engine needs.
-Glenn (2015 Hyundai Tucson engine, bought from Buck in April 2020)

Hi there,
I forgot to let you know my mechanic said that was the best used engine he ever seen or installed. I had it done back in October but I’m going to start driving it this month. Thank you again!
-Ari (2009 Honda Accord engine, bought from Jacob in Oct 2019)

I would like to thank Buck and First Class Engines.  I ordered a motor for my son’s ’94 C1500 a few months ago and I was so surprised when it arrived at the condition, it looked brand new! It was very clean and had no obvious leaks anywhere. It also had the distributor, throttle body, and a brand new water pump attached.  My son and I finally got this project completed and we could not be happier. The truck starts right up and runs perfectly. I do not plan on another project like this again, but if I have to at some point, I will be calling Buck at First Class Engines.
Thank you
-Sean (1994 GMC 1500 engine, bought in Nov 2019)

Good day. I have dealt with Jacob last week for a quote & then Josh this week following up .  Josh was so kind to give me additional info. Both of these guys are fabulous. They are a true asset to your company & I just wanted to let you know! Have a great day !
Diane from GA (2003 Honda Element Transmission - quoted 11/8/19)

Had purchased my dodge charger rt, from a car dealer on long island. The first week it over heated. Dealer said it was fine, but my mechanic said block was cracked. They refused to repair. I looked on the internet for a good, used engine. Took me awhile but finally came across First Class Engines. They were very knowledgeable and courteous. I had my engine within a week, and was up and running better than the first engine. Needless to say, after a year and a half, one of the cam arms broke. I spoke with Matt, had all my necesarry paper work in order that was REQUIRED in the warranty. They are replacing the engine like they said!!!! I will never go anywhere else for my engine needs. Thank you first classengines!!
Santo from NY (2006 Dodge Charger engine)

Dear Buck, I recently bought an used engine for my Cadillac CTS from your company, I always was concerned about buying anything from internet sites, especially a 1700$ used engine, but I had no other options so I did it.
I must say your company exceeded my expectations, I got my engine in a very good shape in just three days and it’s working fine too.
When I was ordering I asked about the vin# and the Fedex tracking # , you sent them to me without any hesitation.
Thank you very much for all the help.
Barry from Las Vegas (2010 Cadillac CTS engine)

The motor in my daughter’s 2006 Honda Pilot died, but the chassis , body, and interior were still good.  My mechanic suggested that I look at a replacement engine.  I had never done this before, but knew that it was important that we get the “right replacement “.   I looked online, and the BBB ratings for several suppliers.  After further deliberation I took the VIN number from her car and began the search.  First Class Engines was helpful to take my vehicle information, and respond back quickly with a low mileage replacement.  I had it shipped directly to my mechanic, and in day and a half they had the car running again.  The mechanic was impressed with the quality of the replacement, and my daughter is pleased to have her back in service.  Thank you first class engines.
James from TN (2006 Honda Pilot engine)

Matt, Just wanted to do a follow up on our experience purchasing an engine from First Class Engines for our 2012 Kia Forte Ex.  We appreciate your professionalism in assisting us in the process and getting the engine shipped in good order to our installer.  When our installer found that even though the paperwork showed we had received a 2.0 Federal, he saw that it was actually a 2.0 California.  After contacting you and even though your paperwork showed it to be a Federal, you immediately shipped with priority another engine verified to be a Federal.  This was done even though your policy is to not ship another engine until the original incorrect was first returned.  After installation, engine fired up on first turn of the key and everything checked out ok !  Would definitely recommend to anyone having to replace an engine, think you would have to look no further than First Class Engines.
Tom from Brentwood, TN (2012 Kia Forte engine)

We picked up our 2014 Chrysler Town and Country yesterday and the engine was running smooth.  Thanks for your good service. Engine was delivered when and how you said it would.  The engine was clean, runs strong and no leaks.   My brother has been a mechanic for over 50 years and was impressed with your warranty. He said you knew what you were doing when you asked that certain items be replaced.
Kate from Foster Cirty, CA (2014 Chrysler Town & Country engine)
Hello Jay.
My name is Brent D & I bought an engine for a 2011 Chevy traverse and it was the right engine and things went smooth from the purchase to the install.
My wife and I are very pleased with the time it took to recieve the engine. Thanks for not dropping the ball and making things happen for us. We will write an "A" review on google.
Brent D from Tennessee (2011 Chevy Traverse engine)

To First Class Engines, LLC
I purchased a 2006 Hyundai Elantra 2.0 L engine (38,000 miles) from First Class Engines of Twin Lakes, WI in September of 2016.  This was by far my largest internet purchase and involved a need for mechanical knowledge well beyond my experience.   Jay was knowledgeable and professional throughout the transaction from ensuring an appropriate match in selecting an engine to issuing an honest invoice and shipping the engine promptly despite the Labor Day weekend.  Jay explained the testing process employed by First Class Engines to ensure good quality used replacement engines.  At my request, Jay spoke with my local mechanic to confirm that the engine would meet our needs and to answer my mechanic's questions and concerns.  This excellent customer service, as well as Jay's candid answers to questions, provided me with the confidence to place my order.  My mechanic confirmed that the engine was received in the condition as represented by First Class Engines and had no difficulty with fit or compatibility during installation.  The engine has been functioning trouble-free for nine months to date giving further evidence that the inspection conducted by First Class Engines prior to sale is sufficiently comprehensive.  Given my positive experience with all aspects of the transaction, I would not hesitate to purchase again from First Class Engines.
Sincerely,
Patty L.
Johnstown, PA   (2006 Hyundai Elantra engine)

I ordered this engine two week ago and now have it installed and running:

My review would read as follows:

I ordered it on Thursday and it was received on the following Tuesday packed well and great shape.

Keep in mind it shipped from Wisconsin to Oklahoma. This happened because Firstclassengines did what they said they would do.

Engine is installed and runs great. Arrived very clean and the condition I was told it would be.

Hello Matt,
It's been a few months now and the engine w/in my Edge runs Excellent (knock on wood). I just want to say thanks for providing excellent customer care and overall professionalism. Thank you again as I can see myself doing business w/ your company in the future. I will continue to spread the word and thanks once again!
Br. Jason D from Connecticut (2008 Ford Edge Engine)

Matt, I am so happy with engine that I bought from you. When I called you I had no idea what to expect. I tried to buy one from another place but they sold it out from under me and didn't bother to say anything. I found your website, gave you a call and within a week I'm driving my car again. The courtesy and professionalism you showed me went beyond what is typical. You answered every question and even did your best to find me an engine after hours. This was the best experience I've had with having to find an engine and be confident that it will work. Thanks to you and your team. I will definitely call you again if I ever need a motor or transmission. Best of luck and thanks again.
Steve T from Texas (2006 Scion xB engine)
Well Matt,
It’s been about a month since our sons’ car was put back together, & he reports it’s running GREAT

He returned it to the Mitsubishi dealer this past week for a general re-check & to ensure all fluids were holding level---all systems 100%!  Cannot thank you enough for your diligence in locating this engine (extremely rare—who knew?!) for us.  Your consummate professionalism & politeness are much appreciated----made us feel as if you were always working for us.  Very refreshing, especially in today’s business atmosphere, where one may feel as if a company doesn’t really care.  You proved First Class Engines truly cares for their customers.  Every day. To say it was a pleasure doing business with you is not only cliché, it’s the understatement of the year! By the way, the shipment to the dealer was ultra-fast; & when they saw the engine I’m told the technicians exclaimed ‘it looks brand new!’. You will be the first to know if we ever need an engine again---but I hope we don’t

Good Afternoon Matt:
I just wanted to write you a little note and tell you THANKS!. Jim finished up putting the engine in the daughter's Suzuki on Monday, April 06th(2015), turned the key on and it took right off and purrs like a kitten. Anyone ever asks us where to get an engine we are going to tell them about First Class Engines.
Thanks a million
Jim and Diane from Iowa (2009 Suzuki SX4)

Hi. I recently purchased an engine from First Class and I want to say they live up to their name. Not only did the engine arrive on time but my mechanic commented on how clean it was. It has been installed and is running great. Big thanks to First Class engines for taking care of me.


I searched a lot of used engine forums online and when I asked what was the best company that has great service, excellent used motors, and fast inexpensive shipping as promoted on the web site I was linked up with Matt at Firstclassengines.com.  My 2002 Mitsubishi Eclipse GS 2.4L motor arrived prompt and was VERY clean. The mechanic installed it and on the first turn of the key she fired right up and it runs flawlessly! I am a very satisfied customer and I would recommend First Class Engines for your next used motor replacement project."

JJ sent us this picture of his beautiful used engine after he installed it. 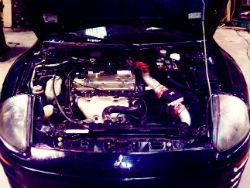 Customer Dennis H. sent us these pictures of his 2005 Saab 9-5 engine after he painted it: 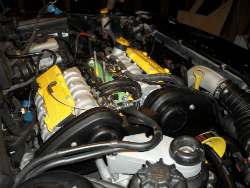 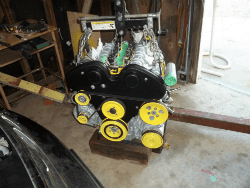 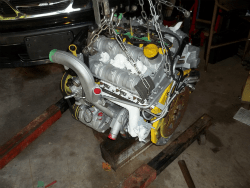